The Nebraska Cornhuskers are currently 5-0, and have been playing a lot better since almost losing to McNeese State back on September 6th. The Cornhuskers avoided overtime with a 58 yard touchdown pass to Ameer Abdullah. Since then, they’ve won their last 3 games by an average of 25 points per game. The focal part of their offense is the run game, led by senior Ameer Abdullah, who has rushed for 833 yards and 8 touchdowns, averaging 7.3 yards per carry. Their quarterback is sophomore Tommy Armstrong Jr., who has completed 54% of his pass attempts for 1052 yards and 10 touchdowns. Their defense has been spotty at times, and is susceptible to giving up big plays. The Cornhusker defense is allowing 331 yards per game (31st in the nation). 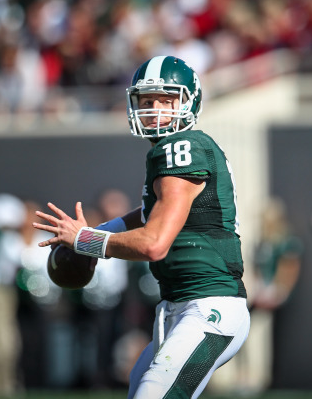 Michigan State quarterback Connor Cook is 3rd in the nation in passing efficiency (192.3).

Since suffering their only loss of the season, the Michigan State Spartans have showed focus week in winning their last 2 games by an average of 50.5 points. The Spartan offense is well balanced, averaging over 263 yards passing and 250 yards rushing per game. Quarterback Connor Cook doesn’t have the most eye popping statistics, but he’s tremendously efficient, completing almost 70% of his passes for 837 yards and 9 touchdowns. Cook is a good decision maker and is 3rd in the nation in passing efficiency. The Spartans have been scoring a lot as of late, but their defense is one of the best in the country, allowing just 289 yards per game. If you took out the loss in Eugene back in early September, those numbers would most definitely be better. Their run defense is stout, allowing just 78.3 yards per game.

It’s a primetime game in East Lansing Saturday night, and the Spartans know they must impress if they want to be considered for a shot at the national championship seeing how they’re in a weaker conference. With Oregon being upset at home, their loss to the Ducks doesn’t help matters at all, and it’s no secret they’ll have to run the table and do so in convincing fashion. Plain and simple, Michigan State is the far superior team, at home, and on national television. The last time this team was on national TV they lost, so they know that they’ll need an impressive performance against a ranked opponent. They won’t get many chances to do so, so I don’t see them slipping up here. Nebraska has been impressive as of late, but they’ve been able to run the ball. They won’t be able to do that against the Spartans. Michigan State has the better coach, better quarterback, and a big advantage in the trenches. The Spartans win convincingly on Saturday night.